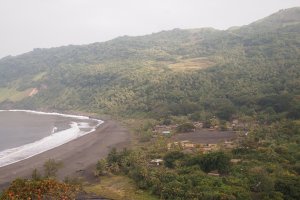 In its heyday, the Jon Frum cult attracted thousands of people to its ceremonies.  Today I am told that only a few hundred attend.  The way that that has happened is all to God’s glory, and I will tell it as best as I know.  I will begin in this post with some of the more spectacular events related to fresh water in Sulphur Bay, the centre of the movement.

As early as 2000, there had been a small church just outside Sulphur Bay up on a rocky hill.  Late one night the pastor was in the church and a young girl came to inform him that a small stream had begun to flow through the village.  The pastor went to investigate this unusual event.

Lake Isiwi as it was (Photo: Ministry of Lands)

Sulphur Bay is situated not more than a couple of kilometres below Mt. Yasur, Tanna’s live volcano, and at the foot of the volcano was Lake Isiwi, a great freshwater lake.  The Island had experienced larger than average rainfalls and the lake was beginning to overflow.

Once the pastor reached the newly formed stream in Sulphur Bay, he heard his church bell ringing in an alarming manner.  It was clearly a warning.

He ran back up to his church, and when he arrived he found the church full with both the few Christians in the village and the Jon Frum people who had responded to the ringing bell.  Everyone in the village was there.

At that moment Lake Isiwi broke and the waters rushed down the valley flooding the village.  Houses were lost, some were filled with silt, and livestock was washed out to sea.  An estimated 4 000 000m3 of water emptied from the lake carrying with it 100 000m3 of soil, and yet no lives were lost, they were safely in the church.

The great problem that Sulphur bay had always had, as with many other villages on Tanna, was that it did not have a fresh water supply.  Not only had disaster been averted, but the village now has a permanent source of flowing water. 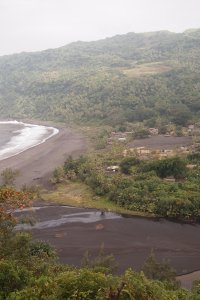 In fact not only do they have fresh water, but they have both cold water and water hot enough to cook in.  Many people in Sulphur Bay see this as God’s provision, give thanks to him, and have turned to him.  Following this incident the chief declared that people could follow the Christian God.

In 2006 the Presbyterian Church of Vanuatu held its general assembly on Tanna.  1000 men from the Jon Frum movement came forward at the assembly and declared that they would follow the Christian God.  They joined 6000 people who had already committed to Christ.

In a separate event, also relating to fresh water, a Christian man was preaching to his people and a geyser of fresh water rose to waist-height beside him.  He smoothly switched his sermon to speak on Jesus’ gift of living water from John 4:13-14:

And people were converted!

Since these events, there has been the opportunity to evangelise, disciple, and plant churches in Jon Frum villages on Tanna, and a network of ‘Discipleship Workers’ has been set up for the task.  The work is ongoing and has not all gone smoothly due to some twists and turns that I will explain in a later post.

Margaret and I hope to go to Tanna so that I can teach at a bible college there to train evangelists for this work.

Please pray for the Discipleship Workers, and for the Jon Frum people on Tanna.

NOTE: If I have any details of this story are incorrect I would welcome correction.  Please email me or comment below.

I would love to hear your reactions!