His choice was between staying in his house in the foothills of North Tanna, a concrete-base building with woven bamboo walls and a corrugated steel roof, or heading down to a cave on the coast. He chose to stay in his house, reasoning that it had stood up to cyclones in the past.

By about 6:00am Saturday morning, he realized he had chosen unwisely. The house was beginning to break up and he decided to head for the cave, a journey of maybe a kilometer-or-so.

For the next two hours he, his wife and five children fought their way through ferocious winds, dodging falling and flying branches and other debris as they dashed between logs and trees, moving from one sheltering place to the next.

They were frightened for their lives, exhausted and discouraged, when the oldest daughter in the family looked up and saw some kind of paper being carried on the wind. She only had to reach up her hand to catch it.

It was a few pages from a hymn book, and when they looked down they read these words:

When the clouds are hanging low,
When the raging tempests blow,
When your soul is burdened with its weight of care;
There is a place of perfect rest,
Where no evil can molest;
Leave your burden at the place of Prayer.
etc.

(Leave Your Burden at the Place of Prayer, Bertha Mae Lillenas)

They were very much encouraged, prayed, and made it to the cave. 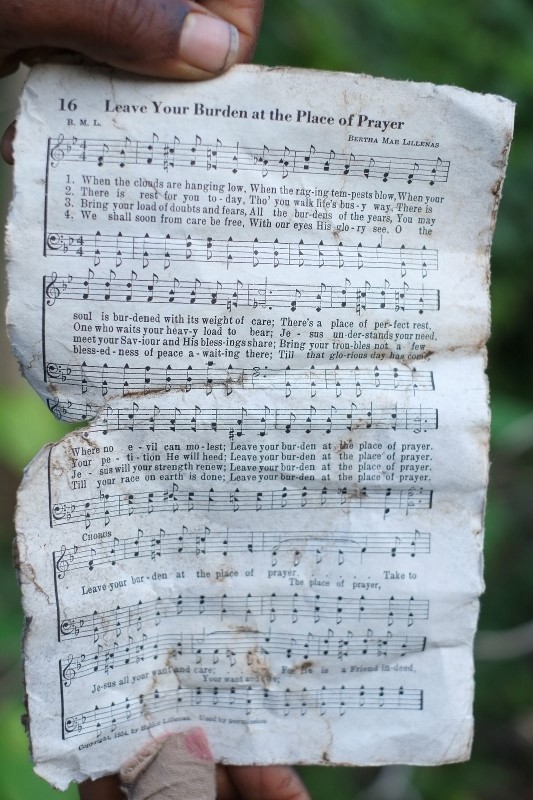