u (then New Hebrides) was first established on the island of Aneityum. Nova Scotian missionaries, John and Charlotte Geddie, arrived in 1848 and by 1849 they had produced the first ‘primer’ and then ‘book after book of literacy aids, scripture portions, catechisms and hymnals, until finally the whole Bible was available in Aneityumese in 1879 after Geddie’s death’ (Miller 1978, 80). In other words, the mission here was founded on a whole lot of book throwing!

When I arrived in 2013, I joined a church that assumes its members will read hymnals and Bibles. It has a written worship book, constitution, rules and documents. Reports are expected to be printed even though few people have a computer and fewer still have a printer – while fewer again have any ink for the printer. I took up work at a Bible College that had its curriculum written on a piece of paper that was … somewhere. Students are expected to have four exercise books and do something with them. If you want to be a church leader you really need to be literate, or at least very good at pretending you are.

I’m guessing Box’s title is deliberately provocative. Yes, it verges on being offensive in its implications of an ‘us’ and ‘them’ style mission and its assumption that the one who isn’t the ‘them’ is the book chucker. But then again, even the introduction makes it clear that Box is aware of the complexities of the twenty-first century and that he sees some benefit in literacy.

Box’s somewhat more docile subtitle is more encouraging: ‘Communicating the Christian Message to People Who Don’t Read.’ That’s what I want to do!

At the start of my second year a keen young student came who couldn’t read. Within a week or two he had disappeared. It transpired that his perception was that Bible College wasn’t for him because he was illiterate. Months earlier a highly literate graduate was recommended for further training even though she appeared to be unconverted and showed little or no fruits of the Spirit.

But Box’s book isn’t just about people who can’t read, but those who don’t read – a group which would encompass all but one-or-two of the students I have taught so far. Most of them can read and write to varying degrees but they would not choose to do so, and when they do read they do not tend to read for meaning. They are primarily oral people.

So, what I want to do is to get into the whole topic of orality and discuss how it can inform the way we do mission and theological education here in Vanuatu, and the way I want to do that is to kind of blog through and discuss this book. In order to be balanced, I then want to do the same with another little book called Is Hearing Enough? by Don Edwards.

Why not join in – wherever you are? Get your hands on a copy of Box’s book (and later Edwards’), read along and throw your two cents-worth in (it would be worth much more than two cents to me – but no pressure). I have read through Don’t Throw the Book at Them once and can recommend it to you. No, I’m sure you won’t agree with everything, but there are plenty of things there to sharpen us all. It may influence the way we evangelise, disciple, train leaders and even translate the Bible.

To give you a hint at where I want to go with this, I’m not planning on throwing out the pencils and paper. I have seen the benefits of literacy. I do however want to question the extent to which we rely on literacy and to better equip myself to teach oral people.

Both books are published by William Carey Library and are available through:

Don’t Throw the Book at Them 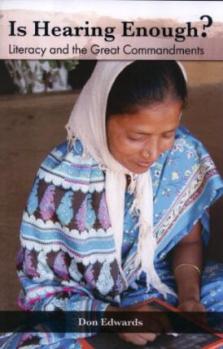 If you don’t want to buy the book or you’re not into reading, join in anyway. I’ll go through chapter-by-chapter, write a short summary and make some comments about how that applies (or doesn’t) to the context here.