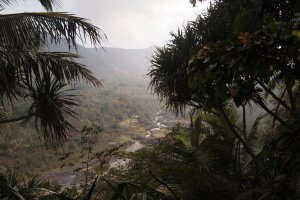 View of the new stream at Sulphur Bay from Jonathan's villiage

Of the miracles that I have heard of surrounding Sulphur Bay and the breaking of the Jon Frum movement, I wonder whether Maliwan’s conversion wasn’t the greatest.  But that’s at the end of the story.  The story begins on a Taiwanese fishing boat in the 1990s.

Fred Nasi was the chief of Port Resolution where 150 years before John Paton had set up his station to bring the gospel to the people of Tanna.  While at sea employed as crew on a fishing boat, a vision of Jesus appeared to him telling him to go back to his island and lead the Jon Frum people back to Christ.

Upon returning he rallied Jon Frum people on another island to join him in reaching Tanna’s Jon Frum cargo cult.  The work of these missionaries gave birth to the ‘Unity in Christ’ movement.

A small Unity in Christ church was established in Sulphur Bay, near to Fred Nasi’s village at Port Resolution.  Fred prophesied the flooding of Sulphur Bay which I described in the last post when Lake Isiwi broke during a storm.  This and other events caused the Unity in Christ movement to gain momentum and Fred to gain credibility, in fact, he became known as ‘Prophet Fred.’

No doubt God was using Fred for his glory, and the hold of the Jon Frum cult was beginning to be broken, but all was not as well as it might appear.

Having originally come from a Jon Frum village, Prophet Fred had not been educated and could not read or write.  Unable to turn to the Bible, he used prayer and fasting as his means of revelation.  Some of his teachings appeared to be sound however others were not.

After initially turning to follow Christ, the people of the Unity in Christ movement began to add to the faith by following food laws and other legalistic requirements.  Perhaps a little like the church at Galatia in the first century who were so easily persuaded to add the need for circumcision to the work of Jesus, and to whom Paul wrote:

You foolish Galatians! Who has bewitched you? Before your very eyes Jesus Christ was clearly portrayed as crucified.  I would like to learn just one thing from you: Did you receive the Spirit by observing the law, or by believing what you heard?  Are you so foolish? After beginning with the Spirit, are you now trying to attain your goal by human effort? (Galatians 3:1-3)

When the Presbyterian Church of Vanuatu held its assembly on Tanna they offered a scholarship to one Unity in Christ member to study at the Presbyterian College (Talua Ministry Training Centre) on Santo Island.

Maliwan, the son of a chief of Sulphur Bay, was chosen.  After just a few months of college, Maliwan was soundly converted!  He completed the two year missions course before returning to his village where he preached to both the people of the Jon Frum movement and the Unity in Christ movement, persuading them to rely on Christ alone.

He was the evangelist mentioned in the last post who had a fresh water geyser rise up next to him while preaching to the Jon Frum people in the centre of Sulphur Bay.  Something like 3000 people responded to that sermon and at this point people really began turning to Christ.

In 2007, 1300 Jon Frum people approached the Presbyterian Church of Vanuatu and asked if they could be brought into the church.  This gave birth to a program of sending local missionaries into villages to evangelise, disciple, and to plant churches.  This work has been supported by Mission to the World.

Prophet Fred continued to hold power in the Unity in Christ movement and to teach ‘another gospel.’  However in December last year (2011), Fred died, and before dying stated that his desire was that after his death his people would join the Presbyterian Church. 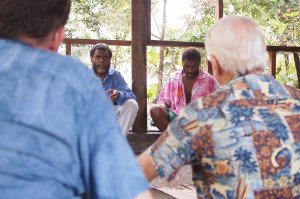 Fred’s deputy was a young man called Jonathan, who is now trying to grab and hold power within the movement.  In February Paul Taylor of Mission to the World met with Jonathan to offer him a scholarship at Bible College.  Paul suggested to him that this would allow him to lead the Unity people in Fred’s desire to see them established in the Presbyterian Church.

Please pray that Jonathan will take up that offer.  He accepted Paul’s reasoning, but was concerned that if he leaves his village to study that he will lose his power.

Given these events there is currently a tremendous opportunity to plant churches and to establish people in the faith through the local Discipleship Workers.

Margaret and I would like to go to Tanna so that I can teach at South Island Bible College and train local people for this work.  We would also like to work in the field; supporting these people in their work (I will better describe the work of these ‘Discipleship Workers’ in a later post).

We would love for you to partner with us in this work.

2 thoughts on “Conversions and Diversions: Unity in Christ”